The Demographics of Segregation

Using demographic data to add context and to understand how things have changed in and stayed the same in Dallas since Brown v Board of Education.
17 May 2018

Sixty-four years ago, on May 17, 1954, the United States Supreme Court ruled in the landmark Brown versus Board of Education decision that “in the field of public education the doctrine of 'separate but equal' has no place. Separate educational facilities are inherently unequal…”.

And while the Supreme Court was clear on the fact that separate was not equal, there was less clarity on how school districts should begin to address the inequality. So for more than seventeen years, Dallas ISD, like most school districts in the south, largely avoided doing anything to integrate its schools.

It wasn’t until 1971, when a federal judge ruled that the time for inaction had passed, that Dallas ISD started substantive efforts to desegregate. You can learn a lot more about this time in Dallas history in our latest podcast episode of “The Miseducation of Dallas County: Desegregation ≠ Integration”, but to add a little context and to understand how things have changed and stayed the same since the 1970s, let’s take a look at some demographic data.

We’ll start by understanding what our demographics look like today, on a neighborhood level across Dallas County. 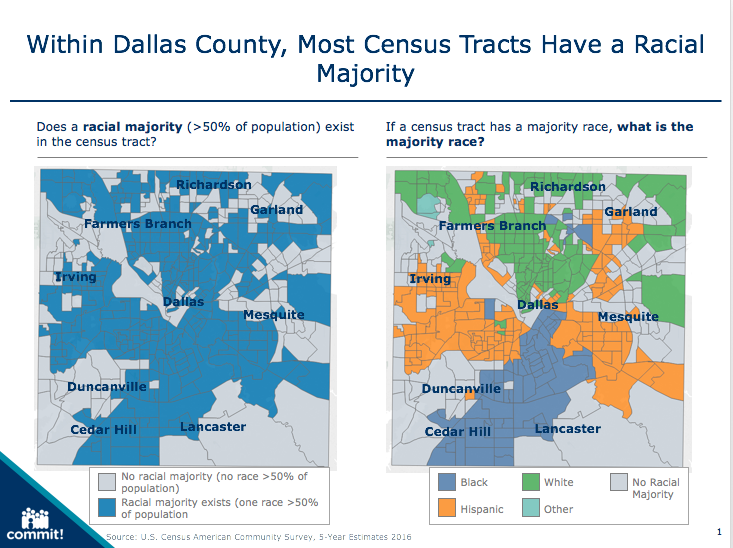 Most census tracts in Dallas County have a single race or ethnicity making up at least half of the population.  But what is striking is the degree to which our county is starkly divided by race.

In 2015 the Pew Research Center, in a ranking of residential segregation, concluded that Dallas is one of the most segregated large cities in America, and is  more segregated along racial and economic lines than cities like Chicago and Los Angeles.

So how has that changed over time? Let’s look at how demographics have shifted in Dallas County since the year 2000. 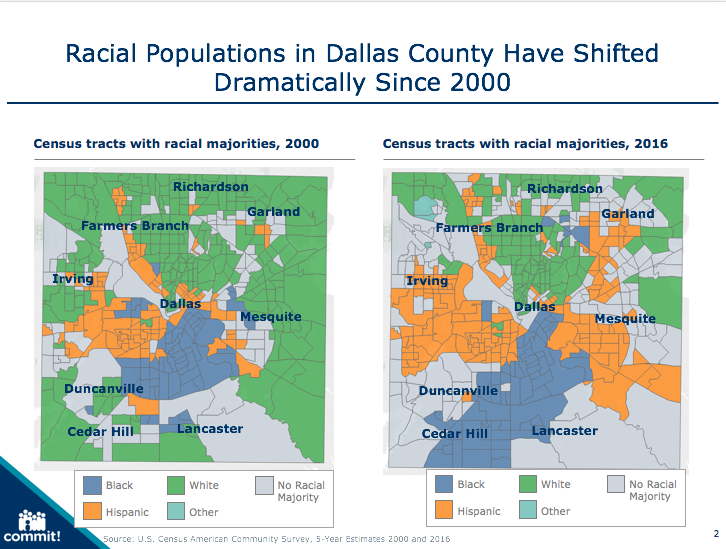 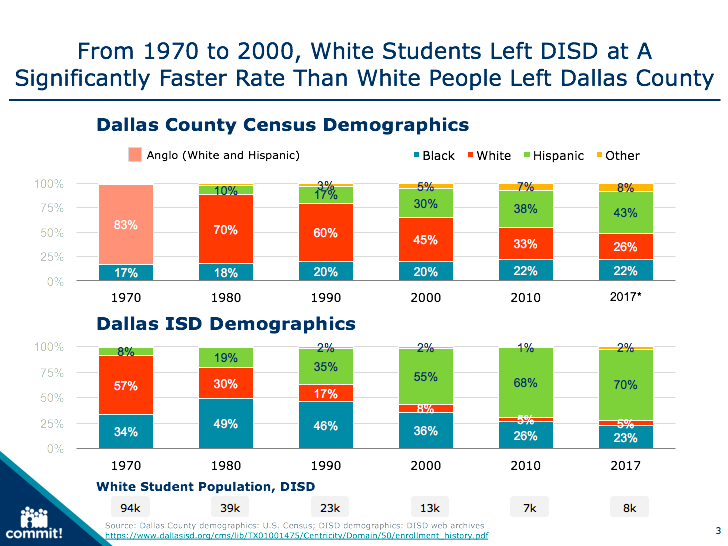 The first thing to note, as we explain in the podcast episode, is that in 1970, the census didn’t differentiate between white and Hispanic, and instead grouped them under ‘Anglo’. In subsequent decades, we show the data split by black, white, Hispanic and other, as the information is currently collected by the school district per federal requirements from the Department of Education.

What is quickly evident in the two charts is how the white student population disappeared much faster than the white population in the county during the same time. The shift from nearly 60% of students in 1970, to 30% in 1980, and just 17% in 1990 demonstrates the degree to which white families in Dallas abandoned public schools. 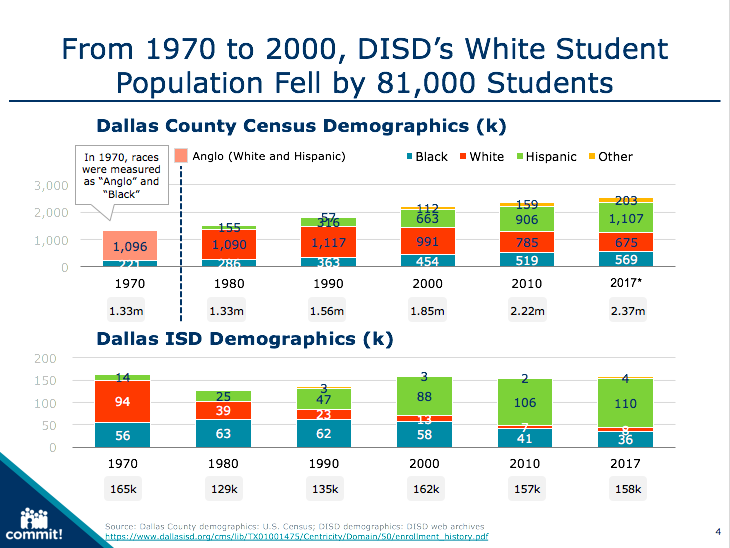 The only thing that has kept Dallas ISD from near collapse has been the growth of the Hispanic student population, increasing from 14,000 in 1970 to 110,000 as of last year.

But what is the benefit of integration?

Journalist Nikole Hannah-Jones has written extensively about the topic. In her widely read New York Times Magazine story about her own experience picking a school for her daughter, she wrote,

Decades of studies have affirmed integration’s power. A 2010 study released by the Century Foundation found that when children in public housing in Montgomery County, Md., enrolled in middle-class schools, the differences between their scores and those of their wealthier classmates decreased by half in math and a third in reading, and they pulled significantly ahead of their counterparts in poor schools. In fact, integration changes the entire trajectory of black students’ lives. A 2015 longitudinal study by the economist Rucker Johnson at the University of California, Berkeley, followed black adults who had attended desegregated schools and showed that these adults, when compared with their counterparts or even their own siblings in segregated schools, were less likely to be poor, suffer health problems and go to jail, and more likely to go to college and reside in integrated neighborhoods. They even lived longer. Critically, these benefits were passed on to their children, while the children of adults who went to segregated schools were more likely to perform poorly in school or drop out.

Hannah-Jones was also featured in a This American Life episode entitled The Problem We All Live With (that should be required listening for everyone reading this), and she goes into more detail about how integration benefits students of color.

I think it's important to point out that it is not that something magical happens when black kids sit in a classroom next to white kids. It's not that suddenly a switch turns on and they get intelligence or wanting the desire to learn when they're with white kids. What integration does is it gets black kids in the same facilities as white kids, and therefore it gets them access to the same things that those kids get-- quality teachers and quality instruction. If you're surrounded by a bunch of kids who are all behind, you stay behind. But if you're in a classroom that has some kids behind and some kids advanced, the kids who are behind tend to catch up. These kids in these classes in schools of concentrated poverty don't have that. They don't have that effect of kids who can help boost them. Everyone's behind.

The maps and the demographic data above are helpful to provide context around the segregation in Dallas, but it is important to remember that these patterns were, in many cases, intentionally created. And to change the amount of segregation in Dallas County, both racial and economic, we will have to be equally intentional. As we say in the podcast episode,

Segregation, separate and unequal school systems, are perpetuated not just by superintendents and judges, but by the decisions each of us make. Not just in where we send our kids to school, but where we choose to live, and with whom. That’s how we move beyond simply desegregating, and achieve true integration.

In the final minutes of the regular session of the 87th Texas Legislature, some notable changes were made to the state’s school finance system in [...]

Imagine a North Texas where economic opportunity is no longer predicted by race, place, or socioeconomic status. What would it take? How long would it [...]

The Equity Of Accountability

Our state's accountability and assessment system was created to provide transparency and critical information to students, parents, and community members across Texas. This system, sometimes [...]

Join us to advocate on behalf of North Texas students, teachers, and schools.